You are here: Home / NEWS / Suicide | Bomber shot down before attacking in UNIMAID (Photos)

Suicide | Bomber shot down before attacking in UNIMAID. Three male suicide bombers were killed in yet another attack at the University of Maiduguri UNIMAID in Borno state last night.

In a statement released by the Borno state police public relations officer, Victor Isuku, the suicide bombers tried gaining entrance into the female hostel of the school when they were killed at about 11.50pm.

“At about 23:50 hrs, three male suicide bombers with IEDs strapped to their bodies, gained entry into the premises of university of Maiduguri. In an attempt to enter the female hostels, they were intercepted by security operatives. Three university security personnel reported injured. Scene visited by EOD personnel and normalcy restored”. 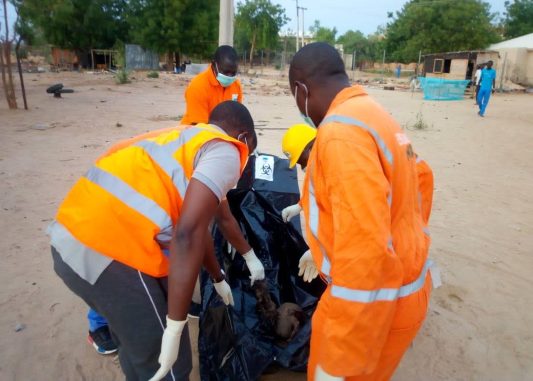 The statement added that one of the bombers hurriedly detonated his IED vest, killing himself instantly. The other two bombers detonated theirs near a construction site also within the proximity of the University premises, killing themselves alone.

In a related development, another suicide bomber also detonated a bomb at Muna garage in Maiduguri. In the last one month, the University of Maiduguri has witnessed six suicide attacks.