You are here: Home / NEWS / The story of 26-year-old cocaine addict will leave you in tears (video) 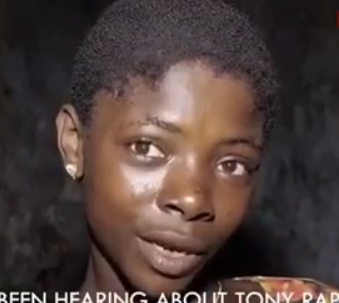 A cocaine addict simply identified as Lizzy, has recounted how she got into drug addiction.

As shared by Lagos pastor, Tony Rapu, whose foundation is working to get her off drug addiction, Lizzy also tells how her boyfriend introduced her to hard drugs.

In two videos shared online, Lizzy who went to A-list schools like Vivian Fowler, Caleb Nursery and Primary  School, recounted how her boyfriend introduced her to crack. She also narrated how she resorted to begging and prostitution just to feed her addiction.

”I am lizzy. I have been here now for seven years. I have been seeing different rehabs and I have refused to go because I feel they will not be able to take care of me because the Heroin and Cocaine has gone inside of me very well.

I finished my secondary school from Vivian Fowler. I went to Caleb Nursery and Primary School.

”We visited Ipodo this afternoon, a dilapidated and degraded community in the heart of Ikeja.
Our visit was to rescue 26 year old Lizzy from the clutches of her captors; the drug sellers and pimps who feed her drug habit from the proceeds of prostitution and other vices.

RELATED:   Champions League: Who is your GOAT? Lionel Messi or Ronaldo

Young drug addict tells of how her boyfriend got her into drugs. The drug rates are alarming and consistently climbing, we have lots to do to save our future. . . @tonyrapu’s Foundation has worked to rehabilitate addicts for years and he shared this video on his page a few hours ago, many commenters are shocked that this ‘middle class’ Woman is in this situation – the reality is that drug addiction affects the rich and the poor. He says; We picked up Lizzy over the weekend. Here, she tells a bit of her story while awaiting our arrival at the joint she frequented in Ikeja. Lizzy tells about her upbringing, her addiction to crack cocaine and the depraved night life she lived to make money to pay the drug dealers. She is currently undergoing her first stage of detox and rehabilitation in the long journey out of addiction. We hope and pray she returns to a normal and productive life afterwards. • For more information about our rehab program, to sponsor or nominate a beneficiary, kindly send a DM to @freedom_fdn • #Addiction #DrugAbuse #TransformALife #Community #Outreach #MyLagosDiaries #FreedomFoundation #GodBlessNigeria #GenesisHouse #HouseOfRefugeForWomen – #amalanews