You are here: Home / BUSINESS / Thunder fired 21 cows to death in Zamfara

Usman told the News Agency of Nigeria on Thursday in Lafia that the thunder struck on Tuesday morning during a downpour killing all the 21 cows belonging to a herdsman, Malam Bature Lere. 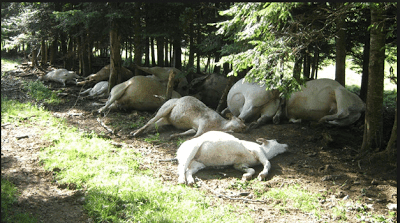 He appealed to the state Government, authorities of the Lafia East Development Area and public spirited individuals to assist Lere who lost all his cows to the thunder.

“I am appealing to Gov. Umaru Al-Makura to assist this man who lost all his cows to the disaster,” he
said.

He, however, advised the herdsman to regard the incident as an act of God and pray for a better future.

Mr Tijani Abubakar, a staff of Veterinary Services Department, Nasarawa State Ministry of Agriculture and Water Resources, also confirmed the incident and described it as “a natural phenomenon’’.

Abubakar, who said that he was delegated to assess the incident, sympathised with the herdsman and assured that he would take his report to the appropriate quarters.

Narrating his ordeal, Lere said the incident occurred around 2:30 a.m. on Tuesday during a downpour.

He said that the cows were all that he had and appealed to the state government and well-meaning individuals to come to his aid.