You are here: Home / NEWS / Toke Makinwa dishes her opinion as Russell Wilson urges Ciara to take Future off child support because they don’t need his “coins”

Toke Makinwa gives her  after it was revealed that Russell Wilson has asked Ciara to take Future off child support because they do not “need his little bit of money.”

At first, it was alleged that Ciara filed documents to change her and Future’s son’s name from Future Zahir Wilburn to Russell Carrington Wilson Jr, after her husband. This was not really surprising, especially after a video surfaced showing Future calling Russell “daddy” while referring to his biological father Future by name.

Now, a website has claimed that Russell wants Future to stop paying child support now that he (Russell) has signed a deal making him the highest paid NFL player.

Russell allegedly said in a recent interview: “I don’t like seeing my son and my wife stressing about such a minuscule amount of money.”

He also referred to Future’s money as “coins” and said Ciara and Future constantly argue because Future is not consistent and can go months without paying for his son’s upkeep.

RELATED:   In Prison for 30 Years: R.Kelly charged with 11 new count of sex abuse and assault involving victims between the age 13 and 16 in Chicago

Russell says he wants to put an end to this because he can provide for his family without Future’s “little coins”.

Russell added: “I’m sure he needs the money more than we do. He’s got other kids in need. No need for him to over extend himself because we are set for generations ahead of us.”

In other news ??? You can’t put a good woman down, Ciara steady re-writing the rules.how did future become such bad market???? Chaiiiiiiii
Dear women, don’t chase a future, think about your future.
Dear men, may you not become a step dad to your own child
#Manlikerussell #levelupona? 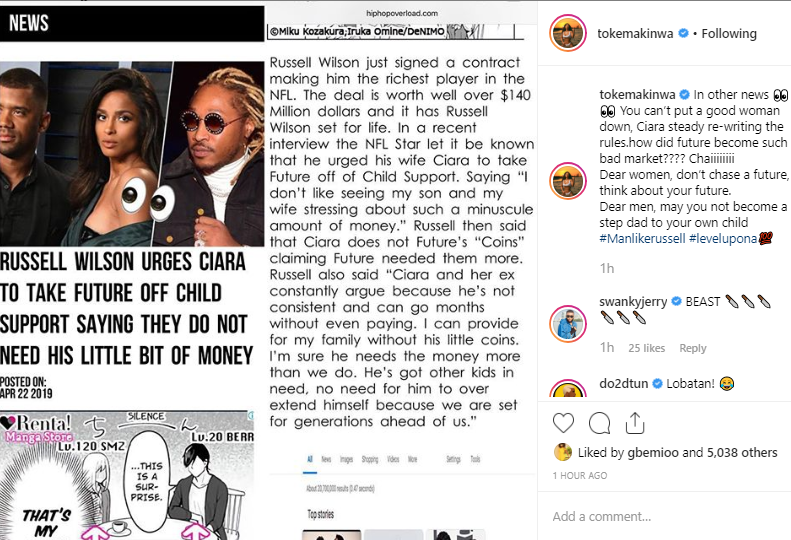