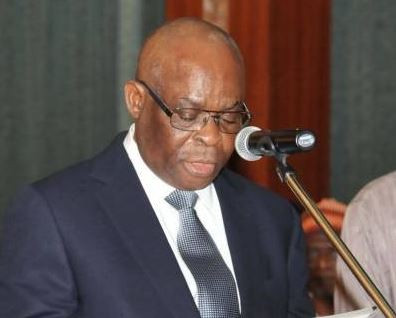 The National Judicial Council (NJC) confirmed President Buhari’s acceptance of voluntary retirement of the former Chief Justice of Nigeria, Justice Walter Onnoghen, saying it is in the country’s best interest. Justice Tanko Muhammad was appointed as Acting CJN to fill in the gap created.

Soji Oye, the council’s Director of Information stated this in a statement.  “Council held an Emergency Meeting today to take formal note of the acceptance of the voluntary retirement of Hon. Mr. Justice Walter Onnoghen, GCON, as Chief Justice of Nigeria by President Muhammadu Buhari, GCFR.

RELATED:   Get in Here: Harrysong is a Father of Twins, Perez and Tarela

“The President’s acceptance of the retirement is in line with Council’s recommendation to the President on 3rd April, 2019. Council at the end of its deliberations thanked the President for the acceptance which was in the best interest of Nigeria,’’ Oye said.

RELATED:   What is the cheapest Glo prepaid plan in 2018

The president had suspended Onnoghen on allegation of complexities surrounding his false and non- asset declarations while the Code of Conduct Tribunal (CCT) convicted him of the offences.