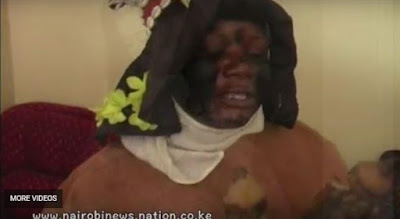 As word disseminated around the neighborhood, hundreds of people stormed the hotel including the man’s wife who claims that she had charmed her husband to expose him.
According to the reports, the woman at first demanded to be paid some ‘good amount of money’ before she could separate the busted couple. She, however, agreed to have them taken to the witch doctor for separation.
The love birds were paraded in bed sheets to where the witchdoctor, who identified herself as Annet Mutheu, was.
On arrival at Mutheu’s place, Nabwire’s sister pleaded for her mercy screaming,

Ms. Margaret Nabwire, said she took the drastic measure of seeking the services of a witchdoctor after neighbors told her that her husband has been cheating on her.

“I have been married to him for more than 20 years and we have five children. Today l decided to teach him a lesson. I paid the witchdoctor Sh 40,000 for assistance,” the crying mother said.

Before the separation, the witchdoctor directed the lovers to ask for forgiveness and after they pleaded guilty she untied two huge pencil-shaped stick and the man breathed a sigh of relief while shouting, “Thank you, my wife, thank you.”
The witchdoctor said she uses ‘kamuti’ with names of either the wife or husband and ties it with a string until the cheating spouse is caught.
RELATED:   Xenophobia: Nigerians be extra cautious, South African government seems to have no control - Hon. Abike