You are here: Home / NEWS / ‘Yours is a complete misplaced anger’ Trevor Noah tells South Africans

Award-winning South African comedian, Trevor Noah, has reacted to the ongoing xenophobic attacks on Nigerians and other black foreign nationals in South Africa.

He espoused that Nigerians and other African Nationals aren’t the ones taking jobs from South Africans as they claim because Africans in South Africa “may lay claim to less than 0.00001%  of wealth in SA”, whereas “Whites in South Africa makes up about 8.7% of the population and controls over 85% wealth”.

He stated, “So when I hear South Africans claiming that other Africans are competing with them on dwindling/scarce resources, I say that our anger and outrage is misplaced.”

“Yours is a complete misplaced anger, prejudice and xenophobia built up out of inferiority complex created by decades of apartheid and oppression.

“I don’t see fellow African as a competitor but a fellow compatriot who is struggling to feed his family and have some comfort in this short life-time.” 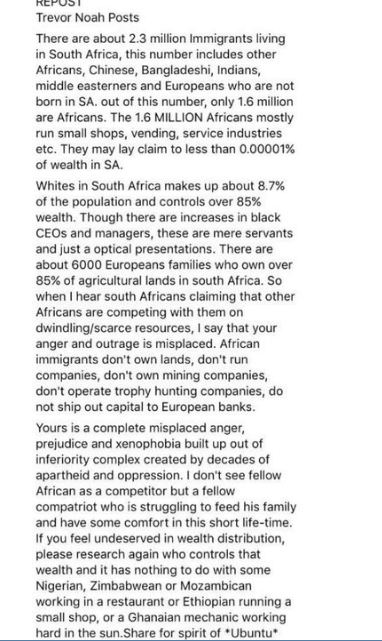